Emika Games, the studio that developed the horror game Summer of ’58, posted on Twitter that they will be “retiring” indefinitely. Although the game was well received by the community, the problem was that it did not bring in much money. The reason is that too many gamers abuse Steam’s refund policy when they have not played for 2 hours. 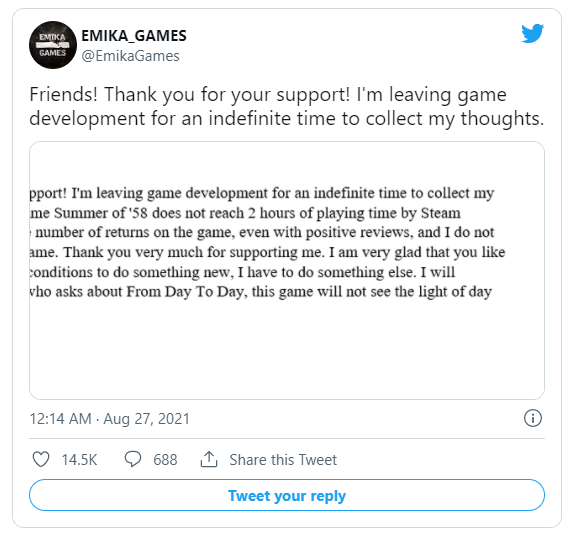 The duration of Summer of ’58 is no more than 2 hours, so many gamers can clear the game before returning it. They broke the game but can still return it without losing a dime. So Emika Games could not earn enough money to continue making the new game From Day To Day. And this game will probably never be released, at least in the near future.

Talking about Steam’s refund policy, it allows gamers to return the game, refund if it is purchased under 14 days and played for less than 2 hours. This is not a problem with long titles and large amounts of content. Two hours with them is not enough to see all the little things outside. However, for short games, especially indie games, this policy is quite annoying. It has created a loophole to help smart gamers play their old games but refuse to pay.

– Emika Games, the studio that developed the horror game Summer of ’58, posted on Twitter that they are “retiring” indefinitely. Although the game was well received by the community, the problem was that it didn’t bring the studio much money.

– The reason is that the game has a very short duration, so a lot of players have abused Steam’s refund policy when playing less than 2 hours to “play the temple”.