Recently, FIFA 22 has revealed 8 special game modes with the common name VOLTA ARCADE. These will be fun mini games for players to entertain and relax with friends.

8 game modes in VOLTA ARCADE will include:

– Dodgeball: 2 vs 2 team game. The players will try to kick the ball to hit the opponent. Each hit will get 1 point. The side that gets more points will be the winner.

Foot Tennis: a hybrid game between football and tennis. The way to play is similar to ordinary tennis, only gamers will not use a racket, but kick the ball with their feet.

Disco Lava: solo game where 1 player goes against 3 other players. Your task is to dribble to the empty white squares. Whoever does it more times will be the winner.

Quick Strike: there will be 12 anti-moving grids around a circle with a small radius. The player’s task is to shoot the ball into randomly assigned nets. 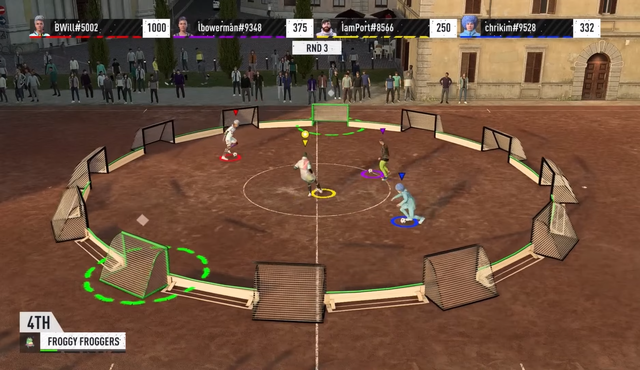 Wall Ball Elimination: there are 4 players in the game with the colors marked in order. After the ball from a player’s feet hits the wall, it will emit a signal for a random color. The player whose color matches the signal of the ball must come forward and shoot the ball against the wall. If the designated person cannot reach the ball within the allotted time, the player is disqualified.

Team Keepaway: 2 vs 2 “ghost kick” game. The longer your team holds the ball and passes more beats, the more points you will gain.

Target Gallery: the gameplay is quite similar to Quick Strike, but instead of a net, there will be many other targets.

Corner Scramble: each player will own a net in the corner of the field. In the allotted time, whoever gets the ball back into his net wins.

As expected, FIFA 22 will be released on October 1 on many different platforms.