Although an indie game is created by only one or a small group of game makers and is not sponsored by the big players in the game industry, it still has a very special charm and even the quality is not inferior compared to the competition. with well-invested games. They are not only successful in terms of revenue, but also won the hearts of countless gamers as well as reputable game review sites. For a closer look, let’s take a look at the top 10 best indie games in the first half of 2021.

If it comes to the best indie games coming out in 2021, Valheim is a name that must definitely be mentioned. Although it started out as an Early Access version (although it still is), Valheim has received huge support from gamers on Steam. This also helps Valheim become a successful survival game when it breaks its own player count record.

In the game, you will play as strong and muscular Viking warriors (whether male or female) trying to survive on a wild planet full of dangerous monsters. 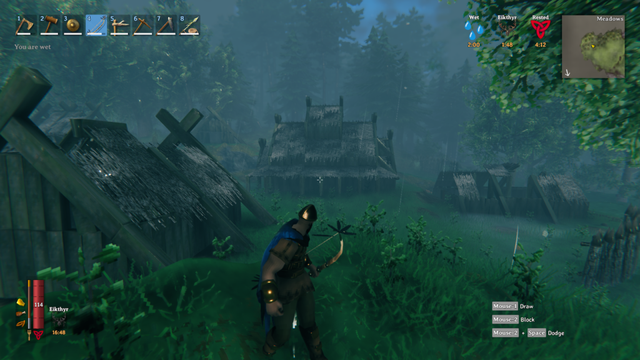 Similar to other survival games, you will need to cut down trees, light fires to light and build houses as well as hunt animals, pick fruits … to eat and live through the day. However, called survival is not so simple. Dangerous monsters are always lurking in the forest to attack you sporadically or pull the board in waves. If you build a wall around it, make sure your wall is tight enough, because these monsters will find a way to sneak or sometimes “apparate” into the house to attack you.

Valheim doesn’t just restrict players to a certain island. You can completely cut wood, build boats and set sail to explore other islands to earn new materials and resources like real Vikings. In addition, some islands will have several different types of bosses. When you defeat them, you will be given a superior skill.

Rain On Your Parade

Rain on Your Parade is a “fun” indie game launching in April 2021, where you play as a cute little cloud whose job it is to ruin a day of work and fun entertainment. human.

Although you take the shape of an ordinary cloud like many other gentle clouds in the sky, you have the ability to create rain, snow, acid rain, storms or even meteor showers. You can choose any ability as long as it makes humanity suffer.

For example, you can create snow so that the road surface is slippery, causing a man to slip into the street and be hit by a car. The car will then lose control and crash into a nearby bus stop and cause others to “suffer” as well. It sounds scary and has a “dark” part, but because the game has a cute and fun shape, it’s not a problem. The game will have a total of 50 levels, with each level having different levels and goals such as a crowded walkway, a bus stop and a wedding… so you can make a mess.

Before Your Eyes is an indie game in the first-person narrative adventure genre. You will be immersed in an emotional story that mixes joy and pain (if you like “deep deep” story games, you’ll win). The special thing is that you can completely control the content of the story based on your decisions. And of course it will affect the outcome of the game.

Before Your Eyes has an extremely unique and intelligent mechanism. This game will use the webcam to track your eye activity to control the game. Every time you blink your eyes, time will go by very quickly.

Maybe many of you will think that using the camera is actually just a gimmick to advertise the game. In fact, this feature so far has worked very well, still bringing new experiences to players without any bugs. If you do not like action and horror genres, the indie game Before Your Eyes will be a suitable game for you. Anyway, this game just came out in April 2021 so it’s still very new.

30XX is a sequel to 20XX, set 1000 years after the events of 20XX. At this time, humanity has lost the will to reach the distant stars and begins to decline in the present world. Once again, you will be on a mission to save the world. This is a roguelike action-scenario game, inspired by the famous Mega Man X game that many of you have played.

You will have to control the main character to shoot and kill enemies, plus overcome challenges along the way to complete that level. Besides the dramatic action element with challenging boss battles, the graphics in the game are also very eye-catching. If you like Mega Man style with better graphics, 30XX is one of the indie games that you should not miss in 2021.

Often indie developers will want to break the stereotype, turn their own way for their brainchild. And the Rhythm Doctor is no exception. Instead of having to press many buttons to the beat like other music games (rhythm), you only need to press the spacebar correctly every time it reaches the 7th beat. The reason is because in the game, the defibrillating coincides. With heart rate can help patients recover quickly.

Besides, this game is also special in that each patient will have a different disease, and each of these diseases is designed based on music theory. So basically, you just play and learn useful knowledge about music in a very lively and “easy to swallow” way.

In addition, in the game there is a tool that allows you to design your own screen and share it with other gamers. Or if you want to find more creative levels, you can download more. It can be said that among the indie games in the first half of 2021, Rhythm Doctor is a game worth trying, guys.