Just hearing the word dragon makes many of you feel excited already. In the game, they can be fearsome monsters, or an extremely intelligent species that guides the player. In addition, they also have a very diverse personality, size, and origin. You can see a dragon coming out of Chinese and Japanese myths; or even a dragon with a strange shape and mysterious power from the West. For a more detailed look, please take a look at the top 10 most powerful dragons in the game world. 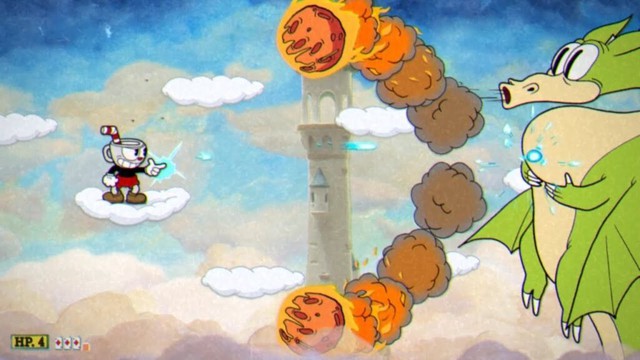 It can be said that one of the most haunting battles for gamers when playing Cuphead is facing the Grim Matchstick dragon. Because the elements in this battle all take place at random, so the skill of remembering the opponent’s actions has helped you overcome previous bosses that are almost useless when fighting monsters. this dragon.

Another factor that makes it difficult for gamers to fight Grim Matchstick is the space in which you can stand. Because dragons can fly, if you want to win, you have to be at the same height as it. In this case, it’s the clouds. These clouds move continuously and of course its position is also random, so you have to both carefully dodge Grim Matchstick’s attacks and pay attention to your position to avoid jumping and falling. below.

In addition, Grim Matchstick has a lot of skills. And again, all of these skills are also randomly released. Among them are a few skills that you will be very difficult to avoid if the clouds are not in the right position you need to jump over. Although this battle will make many of you feel discouraged, but once won, the emotional burst will definitely make you satisfied.

When the Ender dragon was first introduced in the Minecraft game, many gamers wondered if this action of the developer was really necessary. The reason is because Minecraft is not a game that needs epic final boss battles, or a meaningful ending because it is an open world, free and creative game.

However, when the Ender dragon was officially added to the game, players immediately realized this was a great idea. By adding a final boss will create more motivation for players to go explore all aspects and locations that Minecraft is.

You can play the game without hitting the Ender dragon. And there are many ways for you to get to this dragon’s location, so players don’t need to rush anything. Only when you are really ready, come, the dragon Ender will always wait for you without grumbling. Ender Dragon Duel has been updated over the years, so your task now is not simply to kill the dragon anymore, but you also have to destroy the surrounding crystals while this dragon continuously attack you.

As the main antagonist in the third expansion of World of Warcraft (World of Warcraft: Cataclysm), the dragon Deathwing will be one of the scariest bosses you will face. Deathwing was once one of the five members of the Dragon Aspects and the leader of the Black Dragon. However, after traveling with the Old Gods only to be infected with evil thoughts and go mad, Deathwing began to fight against all the other Aspects.

If you don’t understand what I just said above, you can simply understand that Deathwing is an extremely cool and scary dragon but “near the ink is black” should become a boss in World of Warcraft. The battle with the dragon Deathwing can be considered as one of the best battles in the game. Although the battle rhythm is extremely tense and difficult, in return it is a lot of fun to play.

The Legend of Zelda has no shortage of dragons, guys. Players can encounter animals like Aquamentus, Stallord, Gleeok… but perhaps the best of them are Dinraal, Naydra and Farosh in the Breath of the Wild section.

Instead of becoming bosses that you have to confront on your journey, these dragons are sacred creatures, if you don’t preview the guide, only “dignity” will help you catch dragons This is flying in the sky of Hyrule only.

Normally they will not attack the main character, only when Link approaches without any preparation, will his “aura” damage only. If you want to get valuable items from the dragons in the game, good luck. Because you must have a very accurate archery level or have to find a way to climb a high hill. And if you intend to defeat them, you should also… give up, because they are so strong, you are not on the same level as it. You can still attack it to drop good items, but they themselves won’t be damaged.

The name sounds strange, but looking at the picture, many of you will recognize these 2 cute dragons. These are the two main characters in the famous Bubble Bobble series. If you include the spin-off versions, this series has 46 cheat titles.

Back to the main topic, Bub is the green dragon, and Bob is the blue dragon and these are twins.

Bub and Bob are two very special dragons compared to the dragons you often encounter in other games. They are both fun and adorable, having the superpower of turning enemies into bubbles and then bursting that bubble to destroy them. Or more familiar to Vietnamese gamers, there is the Puzzle Bobble arcade game that we often call the bubble shooting game. Bub and Bob will stand at the bottom of the screen, loading bubbles of all colors for you to shoot upwards and score points. It looked so simple, but at that time this game was so “hot” in electronic stores.